Huey was one of the cats I met in my early days at the Sanctuary. He had come in with his “sister” Hannah from a situation in which their owner had moved and was no longer able to keep them with her. Both cats (and several others we’d had from her) were originally ferals, tamed by her determination and love.

Following their arrival at the Sanctuary, she visited them weekly, bringing treats and grooming tools, and giving her love to a big fan-club of felines. Huey and Hannah were always front and centre in the crowd. Donni died in 2013, and over the following few years, the population of “her” cats gradually aged out. Hannah, who loved people (and particularly loved leaping on them) was adopted out; quiet Huey remained with us. 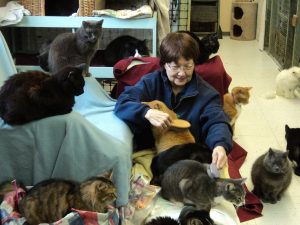 Donnie and her feline fans

He has a stumpy little rump-tail – whether a manx-style mutation or the result of an accident, I don’t know. He tends to be very much a Double-Wide cat, with occasional ventures into the courtyard. Huey loves attention, with no strings attached – he’s not particularly interested in treats, he just wants to know that you’re paying attention to him. 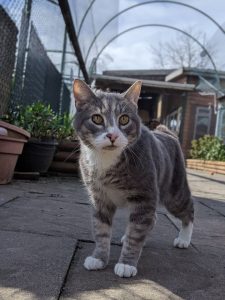 He is quite often found on the Double-Wide couch; he likes to be petted, but he’s not a lap-cat, preferring to remain within touching reach. Especially favoured people get leaned on – and drooled on, as well. 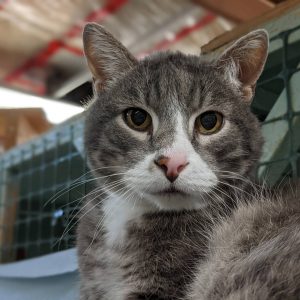 Huey is recognized as a supervisor around the cleaning crew; he will follow the person scooping litter-boxes from cage to cage, making sure that the job is done properly. He appears to like people more than other cats; you’ll occasionally see a little interchange with another loner, but mostly he’s the Cat Who Walks By Himself.

If you’re used to being in another area of the Sanctuary, please make time to spend with this sweet boy. His beautiful eyes will thank you for the effort. 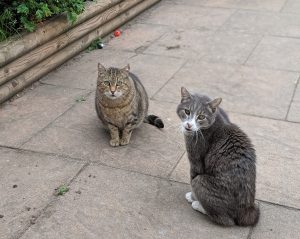