Like Squeaks, TJ is another cat who came to RAPS after straying into a home that had already reached pet capacity.

From Leslie (originally published in The Love Blog in July 2009):

“TJ (Tom Jones) strayed into the yard of a Richmond couple who already had 8 cats, so they brought him to RAPS. He’s a sweet older cat who was briefly adopted to a young woman who was training to become a doctor. Unfortunately, she left TJ alone in his new home for 48 hours while she was working at a hospital. Uncertain of his new environment, TJ urinated on her bed. Had the woman given him a chance to settle into her home, we are confident that he wouldn’t have continued that behaviour, as he isn’t known as a sprayer at the RAPS sanctuary.

TJ is certainly a sweet cat. Barbara writes in her blog that he “has one of the more unique meows, all I can say is it sounds more like a quack. Affectionate and loves food, thus the quacking begins when food is ready.”

I didn’t get a particularly duck-like meow when I visited him the other week, but then I’d just finished chatting with Squeaks and may have built up a temporary immunity to funny meows. And, perhaps more importantly, I didn’t have any food on me to warrant a proper quack 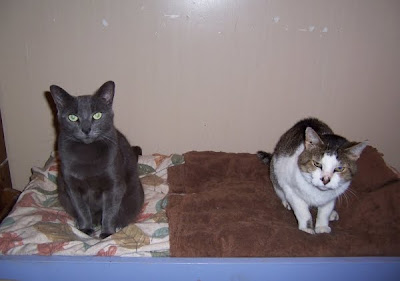 Updated July 30, 2010: I did eventually get to hear the famous TJ meow. He began slowing down in recent months and would spend more and more time sitting on a shelf in the bathroom of the doublewide, giving a quack or two to whoever entered.
Over the past week or so he was fading fast. On Tuesday he had to be taken on that one final trip to the vet. Fortunately, he was able to be accompanied by Karen, who’s always been very fond of him.
Good-bye TJ. You’ll be missed.
Double Wide Trailer, TJ
Share Post: