Over coffee a couple of weeks ago we were talking about cat colourings and especially commenting on our dilute cats. I decided to try and do a little research into what caused the colouring, and perhaps write about it, but quickly decided it was much too big a topic to blog about.  A simple primer on cat genetics can be found here and here
For anyone not familiar with the term dilute as applied to a cat, it just means that the more intense colours found in most feline coats are toned down to a gentler shade. It can apply to almost any colour – grey cat fur is just a dilute form of black, for instance.
The Sanctuary cats we particularly think of as dilutes are the more dramatically patterned ones. Probably the most handsome of these is Princess Diva who was featured in this year’s calendar, and who I just realized I need to blog about – so watch for her story in upcoming weeks.

Very familiar to visitors in the front courtyard is another diva, our little Latte. Latte looks remarkably like her late mom, Val, except for the colouring. The tabby markings show through clearly, but are softened by Latte’s permanent highlights. This little girl is bossy, and has no hesitation in swatting other cats if she thinks they’re heading for a treat that she believes is hers.

Another blonde, but with more subtle markings is back courtyard Sadie. Sadie’s brother Kiddie is also pale in colour – an aspect of the dilute gene – but it’s Sadie’s pretty mixture of grey and peach that always attracts attention. Sadie and Kiddie are getting older now, and are less energetic than they used to be; Kiddie spends most of his time lounging on the table at the entrance to the double-wide trailer but Sadie likes people, and can usually be found in the tea-room. Laps are particularly favoured, but even though there’s nothing wrong with her legs, she prefers to haul herself up into the lap, rather than jumping. Our little Sadist has sharp claws that usually need trimming! 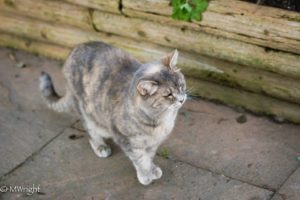 Nervous Nelly still rarely comes down from the cage-tops where she feels safest; if you can get her to sniff a finger, you’re doing well. Nelly has never found another cat to love as much as she adored our orange-and-white fluff ball Mario. Tortoiseshells usually have strong orange and black colouring, but her tortie colouring is muted by the dilute gene.

Perhaps the most dramatic of these five is Alyssa – another dilute girl who’s never had her own blog post. Alyssa is long-haired, which seems to be less common among torties, and her dilute colouring shows in dramatic blond highlights. She was also featured in the 2016 calendar and needs her own blog entry.