Pen 8 at the Sanctuary is one of the feral pens – reserved for the cats who need a sense of security in not having their turf invaded too often by humans (and by other cats). Something about its situation made it particularly susceptible to flooding, and a few years ago our wonderful handyman Doug paved the whole area, and dealt with the drainage problem. It’s sometimes known to volunteers as “the concrete pen”, and in the summer we need to make sure there’s plenty of water and shelter – though, Vancouver being what it is, dealing with rain is a more immediate problem. 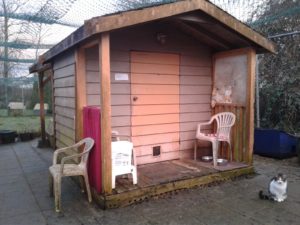 The cats who call it home are not a friendly lot, on the whole; Phaedra is probably the best person to coax them into interaction with humans. There is a bunch of tabby and white cats, who hiss and glare; there is long-haired Smithy and a couple of smaller greys; there is a pair of younger black cats who are beginning to be touchable – and there is Splotch. 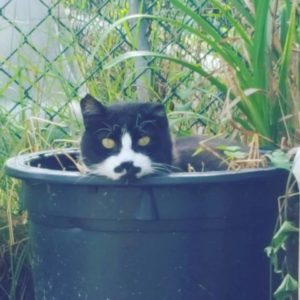 Splotch has been at the Sanctuary since 2011 and part of this pen group for all that time; most of them came from a colony Carol Reichert trapped at a cement plant. His rather battered features and crumpled ear give the impression that life has not always been easy for him. 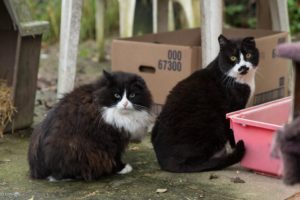 He’s not been as aggressive towards humans as Johnny and Smithy, but it’s interesting to note that he’s obviously been a comfort figure in the group – there have often been other cats gathered around him and head-butting him. 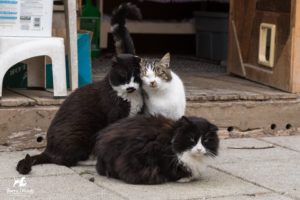 So it was distressing for cats and humans alike when it was reported that Splotch had injured himself some way – he seemed to be unable to stand. The med staff whisked him into care, and the vet reported that it was not so much an injury as some sort of vascular blockage, like a stroke. In any other shelter, he would probably have been euthanized, but not at RAPS!  He was put into one of the upper-level cages near the med-cage, and received lots of attention.  Initially he moved very little, and had to be force-fed; as his mobility increased, select visitors were allowed, and it became obvious that the stroke had affected his behaviour. From being a “look at me and I’ll hiss” feral cat, he became a purr machine for a stroking hand, moving forward to the front of the cage for attention when his particular friends came to see him. Sloppy “soup” food transitioned into regular fare, and treats like chicken and tuna were happily accepted. 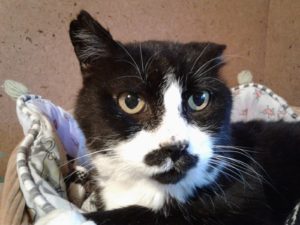 Splotch in recovery – BC

It was tempting to keep him in the double-wide trailer, or to allow him to become part of the general population. One back paw was inclined to drag or turn over, and we knew that it would need to be watched. But given his role in Pen 8, it was decided to return him there, and see how he managed. 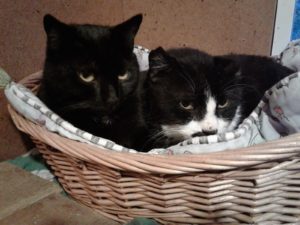 Gigi cuddling with Splotch – BC

The answer was, on the whole, very well!  He claimed an upper-shelf bed, with a carefully constructed path that allowed him to get down by himself. Though many of the ferals use the cabin, the minute the gate opens they scurry to the back of the pen, so we don’t know what the dynamic is among the cats with the returned exile. Visitors usually find him sharing cabin space with the two little blacks, Gigi and Kermit, and we hope that watching him interacting with us will help to accept attention as well – they are certainly willing to accept treats, though not yet allowing themselves to be hand-fed. 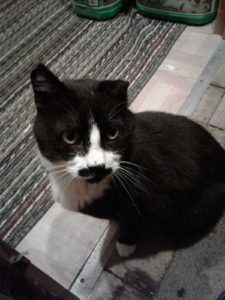 Splotch looking for attention – BC