Ranjit was given his name by RAPS founder Carol Reichert, who named him in honour of our vet.

Ranjit is a friendly cat who must have a little Mario in him, as he’s got a few devoted followers of his own. According to Leslie:

“It’s my perception that timid, semi-feral boy cats are drawn to Ranjit. Cats like black and white Domino. Maybe it’s because he’s so big and they believe he’ll protect them (or, they think they can hide behind him). Come to think of it, most of the boys who love Mario are timid ferals. Confident, tame boys don’t follow him around.”

“He likes to sit with little girls. I remember a little girl from church coming out one day and she was only five or six, and he jumped into her lap and her was bigger than she was; he totally filled her lap.” 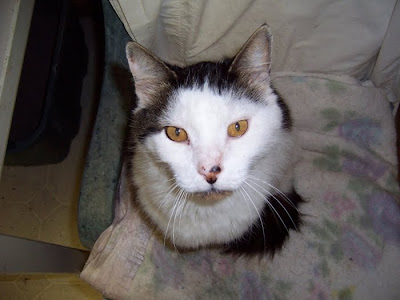