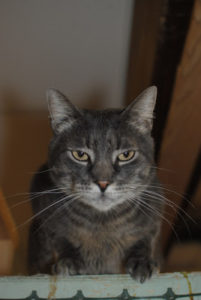 I’ve noticed this big, good-looking grey tabby on top of the cages in the doublewide many times. He’s noticed me too, but our interaction has never gotten past his curiosity turned briefly to look of wide-eyed horror shortly before fleeing if I try to reach up and touch so much as the tip of his nose.

I finally asked Leslie who this handsome boy was and discovered that his name is Matty and he’s the brother to the equally handsome brown tabby, Duke (formerly Beastly) and their sister Jellybean. They all came to the sanctuary as young ferals, which explains the boys’ reluctance when it comes to human contact. I’ve yet to meet Jellybean, but hear her are of operation is similar to Matty’s and suspect her position re. people may be much the same as his.

Leslie tells me that there was a brief period of time in which Matty had started to allow her to pet him, but something must have happened to scare him because she suddenly found that permission had been revoked. I’m thinking that if he was brought around once, with a little effort he can be brought around again.

Sounds like time for another win-over-the-kitty campaign. Who’s in?