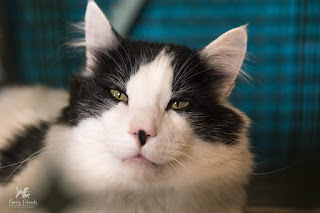 This handsome boy was picked up as a stray in Richmond.  He was neutered, and friendly, so he’d obviously had a home at some stage, but nobody ever claimed him. Right from the start he demonstrated a strong personality, and someone decided he should be named Leonard diCatprio 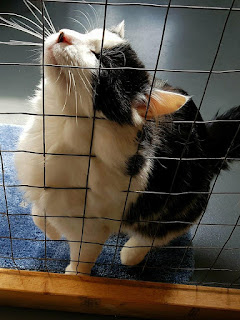 Life at the 5 Road Shelter did not suit our Leo. Several examples of aggression were enough to convince the staff there that he would probably do better at the Sanctuary, and he was transferred to our care and popped in the first cage in the DoubleWide. 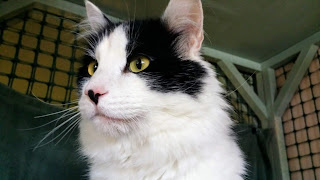 There he proceeded to charm volunteers and visitors alike. A warning note on his cage advised those who sat with him to allow him to make the decisions about petting, lap-time and the like, but we had very few outbursts like the ones at the shelter.  Leo’s far from the only cat for whom this is the case. The City of Richmond has approved the building of a new animal shelter; at the moment, the cats are largely in the forward area of the shelter and the dogs towards the back, but noise carries, and already-stressed cats are not made happy by barking dogs, small cages and limited space. 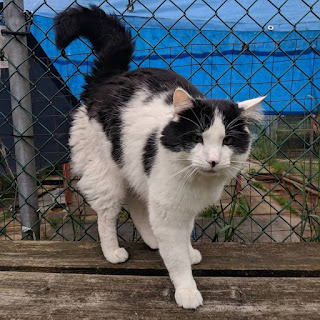 We often talk with Sunday visitors about the fact that we transfer adoptable cats to the Shelter. What we sometimes need to point out is that traffic flowing the other way may give us cats that in other situations might be adoptable. They’re not cats that can be adopted by just anyone – they need a cat-wise owner, one who is willing to allow the cat to dictate some of the interaction. Beautiful Eli was twice returned to the Shelter for aggression; most of our volunteers know well enough to let Eli decide when to sit with you, or to be petted. Cat-savvy people know that felines usually have their own agenda, and being picked up and fussed when they don’t want that can produce an irritated reaction which too easily results in an “aggressive” label. 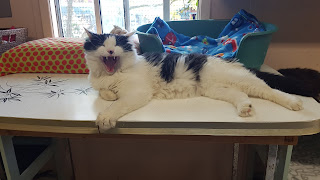 Leo is one of those cats.  In his happy-space he will cuddle – wanting to be carried, leaping on to your lap and demanding head-bonks with paws on your chest.  When he’s not in the mood, he’s best left alone for a bit; he’ll come round sooner or later. 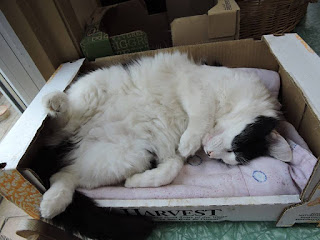 He has quickly discovered the best places to be – the comfiest beds, the shelves where he will be admired, and the places where he can hide out of reach. He mostly ignores the other cats; he knows that HE’s the most important one, and he has no need to demonstrate his superiority – it’s evident. When in the right mood, he enjoys being worshipped; he drapes himself over the table at coffee-break or situates himself on the shelf at the entrance to the Double-Wide so that you have to pay attention to him. 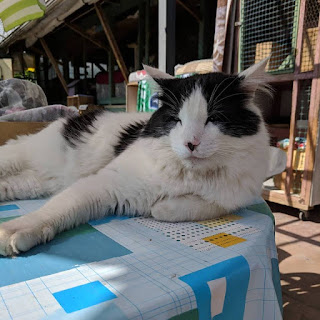 We love having Leo around – and we really hope that sometime he will find the person he will fall in love with so that he can go to having his own home again.