Jerry is another cat featured in “Dr. Jeckyll and Mr (or Ms) Hyde Cats at the RAPS Cat Sanctuary.”

“Jerry is usually a well-mannered, easy-going and playful cat, but don’t ever try to break up an argument between him and another cat! Several volunteers and a few well-meaning visitors who attempted to act as referees in one of Jerry’s ‘disagreements’ have become victims themselves. Being at the receiving end of one of Jerry’s attacks can be quite a shock, especially for those who previously saw only his nice side. Fortunately, Jerry doesn’t get into too many altercations, but there has been talk among sanctuary volunteers of forming a ‘Jerry Victim Support Group’.”

On one of my first visits to the sanctuary, I came across this nice looking cat napping on a cushion placed on a shelf at about eye level. Sensing my presence, the cat gave a little yawn, had a little stretch, then waited for me to come over and visit. A little pat, a little purr, a cuddle, more wriggles and purrs, all culminating in a nose rub.

As I was leaving the room, Debbie came in, having just then remembered to warn me about this cat named Jerry and his history of doing things to volunteers that leave scars…
“Which one’s Jerry?” I wanted to know.
You can probably guess which one.

I considered this a narrow escape and made an effort to avoid him thereafter. Perhaps unfairly… He’s only ever behaved like Dr. Jeckyll with me, after all, and sometimes even looks slightly confused when I turn down his invitation to come over and give him a nice soft.

Or is that all just a ploy…?

A question for other RAPS people:
Has Jerry ever given you trouble when he’s not involved in some altercation with another cat? 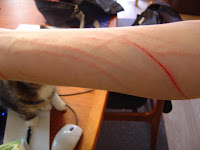 So far, the answer appears to be an emphatic YES!
In response to my question, Ann sent me this evidence that the Jerry-threat is never to be taken lightly-