Cats have a reputation for being loners. 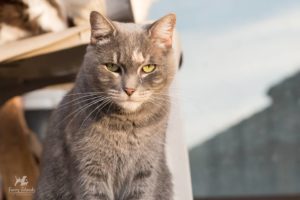 In actual fact, like humans, they run the gamut from being antisocial with other cats and humans, to loving everyone around. They rarely go as far on that spectrum as dogs, but we have many cats who enjoy each others’ company, and love having human attention. The introverted end of the spectrum I call the Garbo cats (“I vant to be alone…”) and they usually carry that bubble of alone-ness around with them. Cat-spats most frequently happen when another cat moves into that bubble.

There are several front courtyard introverts who have already been introduced, and many of them can be found around the entrance to the Single-Wide. Timmy has claimed the hallway by the door, and tends to be very unhappy when another cat moves into his space; providing different levels to sit on means that an interloper can co-exist with him if the two don’t look at each other.  Grey Leland avoids the gaze of any other cat on the principle of “If I don’t see you, you don’t exist” – but he can often be found on the porch seat with other cats steering a wide berth around him. 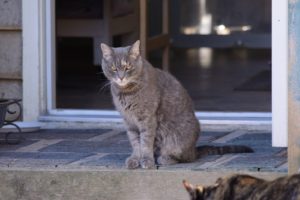 Another porch inhabitant is Iris. This pretty girl is mostly grey with peachy markings. For the greater part she sends off a vibe of “I need my space” but she has her favourites among the volunteers, and there are several people who make a point of having Iris-time when they’re done with their shift.  And always on a Sunday, Iris will find at least one visitor who will sit with her and make her feel loved. 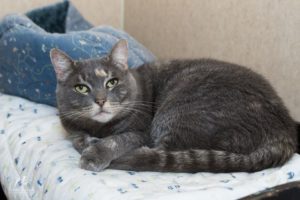 Iris came to RAPS in April 2017, when her owner moved. As sometimes happens, she was shelter-stressed in limited space, and aggressive. In some shelters the aggressive label would be fatal, but at RAPS we are able to move a cat from Shelter to Sanctuary, and give it more time and space. I understand that her name was originally Isis, and the RAPS staff changed it – only to find that her former owner’s name was Iris! 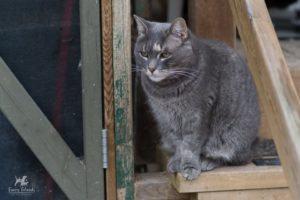 Last year we did in fact have a potential adoption for Iris, but it didn’t work out, and she came back to us. We still think there is hope for her – a home with no other cats or dogs, no children, and lots of love and patience would suit her very well. 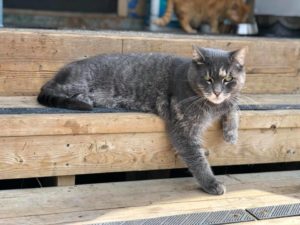 In the meantime, she continues to claim the front steps, and to hope that someone will sit down with her and not allow other cats to muscle in on her precious time with a human friend.