In addition to being Canada Day, tomorrow marks one year in my first pet friendly apartment, and one year since I brought two cats from the sanctuary home to live with me.

It’s been fun getting to know each other over the past year. And it’s interesting, when bringing home adult cats, how some personality traits show up right away, while others only really manifest once they’ve gotten to know you to their satisfaction. Here’s a brief retrospective of our first year:

July 2009: Leo searches for hiding spots in the cardboard jungle;  Daphne felt at home from the first

Summer 2009: Leo finds potted plants to be good company and likes to sit as close as possible

Autumn 2009: Bought for the cats: 1 stuffed rat from Ikea Bought for the human: 1 Ikea lamp in small box The rat gets moved around the apartment from time to time,  but it’s the box they love and I still haven’t been permitted to recycle.

Autumn 2009: The first cats I’ve lived with who actually care for each other rather than simply living under a truce of mutual toleration.

December 2009: Leo has come to love me, but he worships his mom. He is still distraught if he has to be without her for even a few moments.

December 2009: Spending Christmas at my parents’ in Victoria meant bringing the furry family with me. Leo hated the car and yowled as long as it was in motion, but felt safe in the room set aside for them at my parents’ place. Daphne was ready to move in. When we got home, I was sure they’d be traumatized by so much as the sight of their carriers. They quickly proved me wrong by climbing right in. 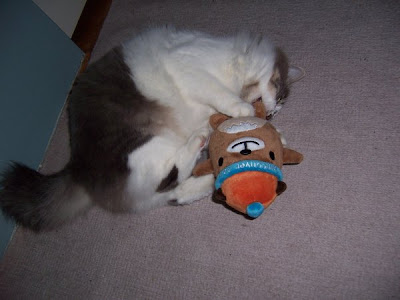 January 2010: Leo prefers to eat with his hands

April 2010: Daphne sitting pretty. She loves lounging on the cat tree  by my third floor window and watching passers by.