This is the second in a series of stories about five cats who were recently transferred to the Cat Sanctuary from the Richmond City Shelter because they were considered unadoptable. Chester was believed to be unadoptable because he appeared so unfriendly – scratching, biting or otherwise showing signs of aggression towards his caregivers there. For a cat like Chester, who was known to be someone’s pet at one time, that kind of behaviour is a defensive one, the result of stress, fear and mistrust. Fortunately, in a non-threatening environment and shown gentle love, such cats can become affectionate again, and Chester’s now well on his way there. But he had to use up a few of his nine lives first! 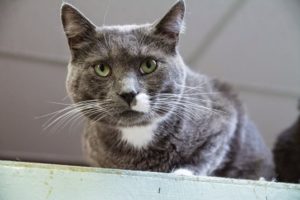 We don’t always know what trials and misadventures cats experience before they come to RAPS but, thanks to his rescuer, we know some of what Chester had to go through.  It’s a wonder that he trusts any of us at all, and the fact that he’s a pretty nice boy despite all he’s been through is quite remarkable.  His owners had kept Chester outside, allowing him into their house only during feeding time.  Doesn’t sound like a loving environment for a cat, does it? To make matters worse,  when Chester’s family  moved, they left him outside to fend for himself permanently! Fortunately, Sharon, a volunteer at RAPS City Shelter, lived nearby and, seeing how Chester’d been treated, she’d been keeping an eye on him all along.  Unable to take him in herself when she realized that he’d been left behind, she started putting  food out for him.  He’d gracefully run along the top of her fence to enjoy his meal but wasn’t going to let her get too close.  On one occasion, Sharon spotted poor Chester cowering under a shrub, being attacked by crows. She was able to chase the crows away and Chester carried on, still homeless. 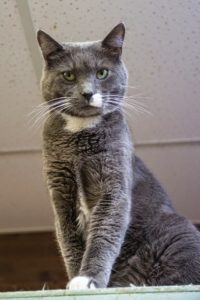 By the time his people had been gone for about a week, Chester had established a twice-a-day feeding schedule at Sharon’s place and she’d often see him lounging around in her back yard. But, one evening, he didn’t show up for dinner.  Sharon walked around the neighbourhood, calling his name and rattling the treat bag, but no Chester, not then or the next day. She worried that he may have become trapped in the empty house next door and contacted the agent, who didn’t seem very concerned until Sharon suggested that a cat pooping or even dying inside the empty house wouldn’t improve its appeal to potential buyers. That got her inside the house but, even after an extensive search, she couldn’t find Chester. By this time, it had been three days since she last saw him. She persuaded the agent to leave an upstairs window in the house open just in case he had been hiding too well inside. Sharon’s persistence paid off – she kept a close eye on that window and, when she had just about given up ever seeing him again, Chester popped out of it and onto the roof of the house! He was so weak, he wobbled with every step. His rescuer, in happy tears,  climbed up onto the balcony with his food dish and he managed to get to it.  It took less than a minute for the food to disappear.  She ran home for more and by the time she came out of her home, he was waiting on her back porch for seconds! A few days later, she was able to capture him and get him to RAPS City Shelter. Soon after his arrival there, after some necessary medical interventions, Chester developed a very bad cold, wouldn’t eat and was losing weight. Despite his severely weakened state, no one could get near him without leather gauntlets. He must have been so angry and frightened by everything that had happened to him. Fortunately, the medications he was on began to take effect and he regained his health. 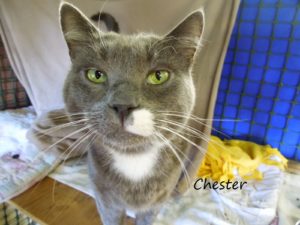 However, by this time, he’d established a reputation as aggressive and therefore unadoptable so off to the Sanctuary he went. After just a few weeks there, Chester has shown himself to be quite lovable although, not surprisingly, a little wary of people he doesn’t know. He prefers to hang out on top of the cages in the double-wide trailer or in the back courtyard and enjoys a good ear rub and cuddle if someone takes the time to make contact with him and gain his trust. He was especially happy to see Sharon, his guardian angel, when she visited recently for a happy reunion. Let’s hope our Chester finally gets to live happily ever after and doesn’t have to use up any more of his nine lives!