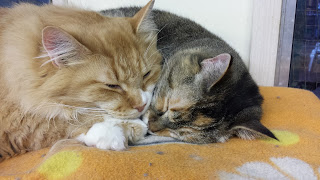 These two sweet cats came to us when their owner, moving to new housing, was forced to surrender two of her four pets – and opted to give up the ones she felt had the best chance of being adopted again. It was heartbreaking for her – there are currently various petitions going round calling for an end to restrictions on the number of cats in Greater Vancouver rental housing for responsible pet-owners, but nothing would sway the regulations of the place to which she was going.

On arrival at the sanctuary (DW)

Diamond and Garfield came to the Shelter at 5 Road about a year ago, and were housed in adjacent cages. They are mother and son, about 8 and 7 years old respectively, and deeply bonded to each other. Neither of them is a small cat, and Garfield was found lying in his litter-box so that he could reach a paw through the bars to touch his mom. The Shelter staff decided that though they’re adoptable, and therefore should be on view at No 5 Road, they would actually do better at the Sanctuary, where we could give them a large cage which they could share, and still have room to move around.

For the first month or so of their stay with us they huddled together, obviously scared by their change in circumstances. They both had some health problems initially. Both needed to lose some weight, but that’s better done with more exercise rather than restricting their diet too much, and in a cage they couldn’t get much exercise at first. Garfield was receiving treatment for an eye problem, and also turned out to be diabetic – a condition that once diagnosed was swiftly got under control with twice-daily injections.

Once released from their cage, they soon settled to life in the Single-Wide. They are still often found together – either sleeping or grooming – but both are comfortable on their own. Diamond is a box-aholic; when I take the last cans out for evening feeds, I often put the box on the floor and Diamond immediately takes possession of it.

Garfield is one of the quality-control assistants at meal-time, hoping for the first taste off every plate. Most cats are photogenic, but Garfield is particularly so, and his picture is one of those featured in the new 2016 Calendar. 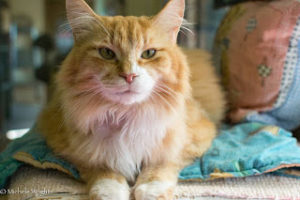 This is a pair that is still very adoptable, though it would need to be to a home where the adopters were comfortable with insulin checks and injections where necessary. For now, they are still enjoying each other’s company, tolerating the other cats, and welcoming occasional visits from their former owner who is so happy to see them doing well with us. 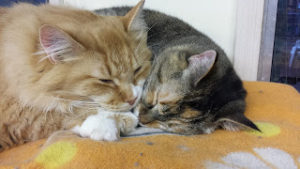 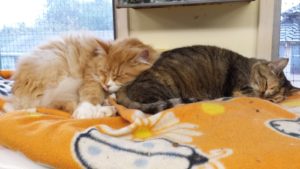