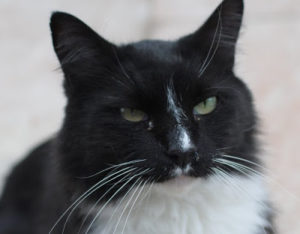 Cozy is one of my new best buddies at the sanctuary. I’m not sure which one of us first decided to befriend the other, but whoever it was, it seems to have stuck.

Cozy’s such a sweetheart now, I was surprised to find out from Leslie that when he came to the shelter as an adult cat years ago, he was so wild that people were afraid to go in his cage. His brother, then by far the tamer of the two, was adopted by former regular volunteer Tess. It may have taken him a little longer, but Cozy did end up taking up his brother’s view that people are a kind of OK.

I’d tried once to pick Cozy up and was gently rebuffed with a wiggly escape. Assuming that wasn’t his thing, I didn’t push the issue. It never occurred to me that this might be a cat who’d just never been held and cuddled before! 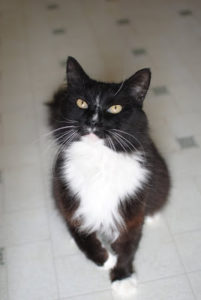