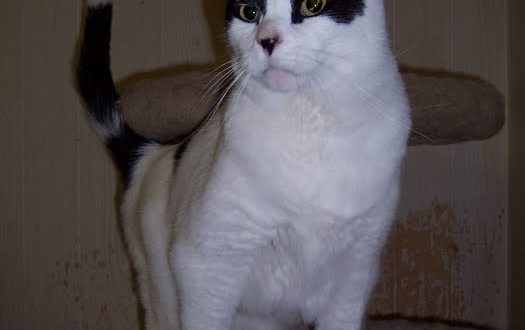 7 1/2 year old Cow is both old and new to RAPS, old in that he was adopted from us as a kitten and new as in just a couple of weeks ago he was returned.

To say that Cow is “a nice boy” just doesn’t seem to cover it. “Delightful” comes to mind. Friendly and affectionate by nature, he must be feeling a little lonely now, by himself in a cage as he gets used to being at the sanctuary. Staff have put up a sign on the door saying “Needs lots of love” so volunteers know to go in and spend a little time with him. As I did this evening.

Cow was surrendered for inappropriate peeing. Some cats just develop a habit of this where they can’t seem to help themselves from marking everything in range, while others start to do it in response to changes in their environment that they’re having trouble adjusting to. We’re thinking Cow falls into the latter category, as it sounds like a relocation or two of his place residence caused abrupt change and, more importantly, a marked reduction in his area of operation.
Moving from a house with outdoor privileges to an apartment with none can be hard on a cat. 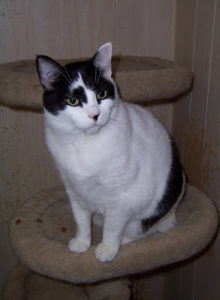 Does this make Cow “a pee-er”? Hard to say. Not necessarily – sometimes cats who’ve been surrendered to RAPS for the same reason cease the behavior once removed from the environment or situation that was upsetting them in the first place. Hopefully, this lovable fellow’s issue will prove a temporary one. It doesn’t take more than a few moments in his company so see how much he’d love to go home with somebody.